The road to St Martin Vesubie takes you up the Gorge du Vesubie.

This is a narrow two lane road, used by trucks, coaches, tractors and cars, and the river flows many metres below. Riding through this ancient chasm, it feels as though you are on a narrow ledge, and you are, but French driving being what it is, it is nerve wracking at best, given the twisting turns, tunnels, and kilometres of overhanging verticality, laced with rock catch nets, which just serve to increase speeds in the hope that boulders, rocks and even pebbles are caught by these, lest they fall onto where you happen to be in your two litre powered metal coffin!!

And a ledge it is…but whilst looking Disney-esque, it is stunningly real, and truly beautiful…and not at all like Devon’s wild flower filled country lanes!

From the moment you pass St Martin du Var, the road goes up, and up, and up. On the occasional plateaux, there are pretty towns with evocative names – Lantosque (home to a brilliant sandwich shop), and Roquebilliere.

St Martin Vesubie is a busy little place and offered the last semblance of population, before travelling (still upwards) the final few kilometres to my destination. A typical steep zig-zag alpine road, where on a tight bend, a family had stopped for a selfie in front of the ‘Cascade’, a water fall taking the Boreon’s flows down toward its destination, the Vesubie.

This was sunny morning and the drive toward heaven excited my soul. And ahead was the monster which is Cima di Brocali, which tops out at just over 3050 metres and sits astride the Franco-Italian border. It is the second highest peak in the Mercantour. 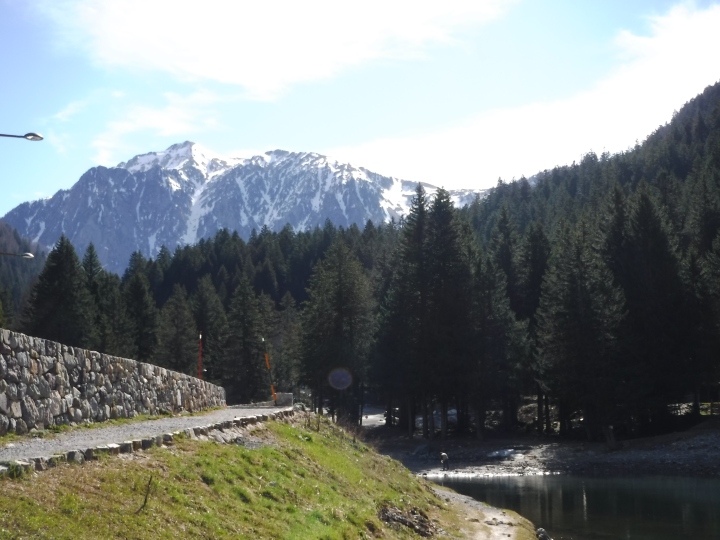 At La Boreon, a mere 1800m above sea level, Electricitie de France have damned the river for energy benefit, and this has created a lake of unimaginable clarity where the resident wild fish can be seen easily, at least in this day’s sunshine, 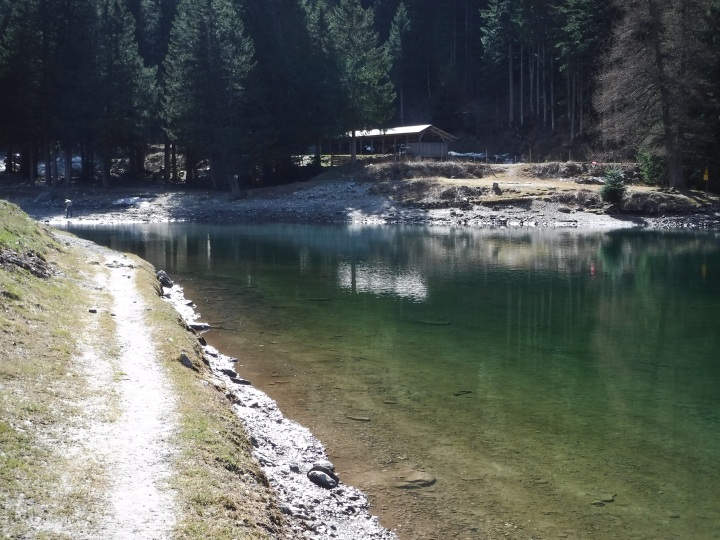 and this makes a wonderful setting for Dads to teach young Sons the gentle art, even if worm and spinner seem the preferred lures. So catching cannot be easy, but in that setting…!

I met Marc (of whom more at the end of this piece) for our third excursion together, and our first port of call today was the Lodge, which is managed by the most impressive young lady, and fly fisher, Sophie. Her dedication to her love for La Boreon, is that she is a 7 day a week committed lady who drives from her family home in Nice along what I have described, for every day in the seven months of the fishing season…to support all who will enjoy this fabulous place.

The Lodge (Le Chalet des Pecheurs) at Lac Boreon is also home to the tourist centre which manages the Nordic skiing in the winter, and the Alpha Parc through the year. This Parc is a sanctuary for wolves…!

The stream tumbles down over limestone boulders and the steepness is surprising so the clear water rushes through at a fair rate, creating pockets and pools, and a there are a multitude of hiding places for the wary critters to feel safe under when not feeding.

And on this day, with temperatures rising from 7c mid morning to just 11c mid afternoon, the water was very cold and few ventured into the flows. So the order of the day was nymphing with a small bite detector a metre above the weighted pheasant tail.. The fishing is best when the skies are clear, and when clouds drift past and light fades a little, the activity drops off noticeably. Sophie broadcasts the likely conditions early every day on the Federation Facebook page to alert the Nicoise on what they might find. 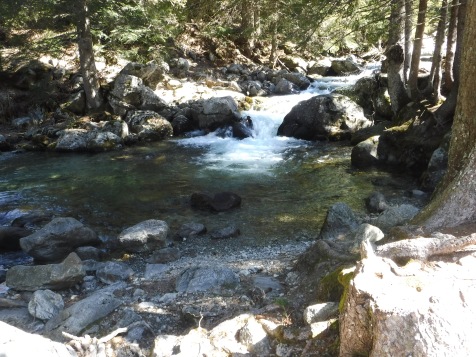 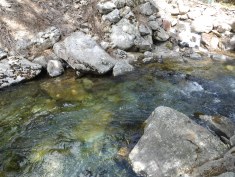 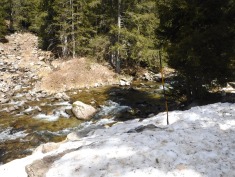 Marc prefers the fishing in the brightness of July, when stoneflies and the few ephemera are about and the fish feed furiously. He would then use caddis type flies, and a forty fish day is not uncommon.

A fish of 30 cms here is considered a specimen, and I was lucky to catch three of that size. 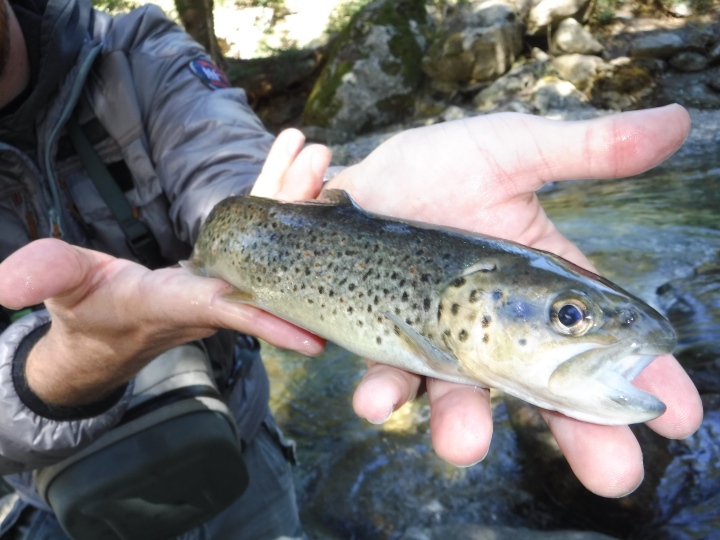 They were all a little ‘maigre’ however, not having regained weight after last years spawning. with so little food about just yet . In hue, the strain hereabouts are generally pale with very dark blotchy black and red spots. Scrappy, too. 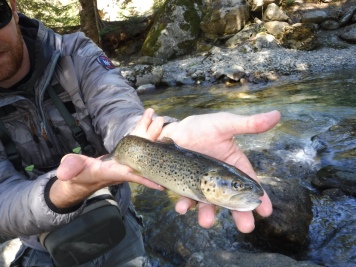 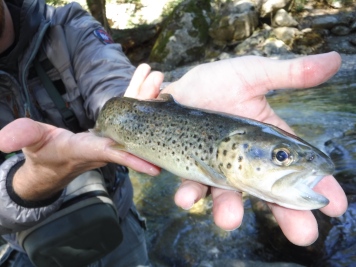 I have been flyfishing for 55 years and still have much to learn! Just as a golfpro will encourage a minor adjustment to your swing, a good guide will suggest an improvement to ones technique, and Marc did that for me. Always lead with the rod ahead of the trailing nymph to keep more in touch with it and to increase the chance of setting the hook at the take. Simple, really, but for a dry fly purist like me, invaluable. And just one example of what makes Marc such a good guide, as well as very good company. 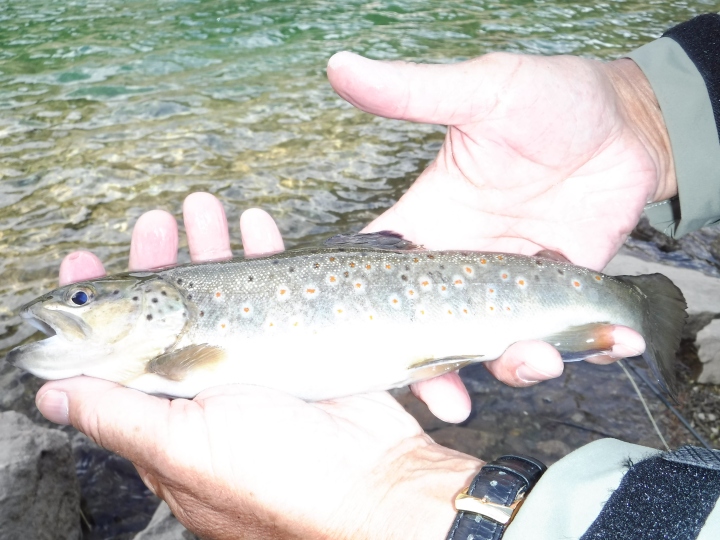 We will fish again, together, in June when we will try to catch a trout from the Caramy in the department of Var. I can’t wait!! 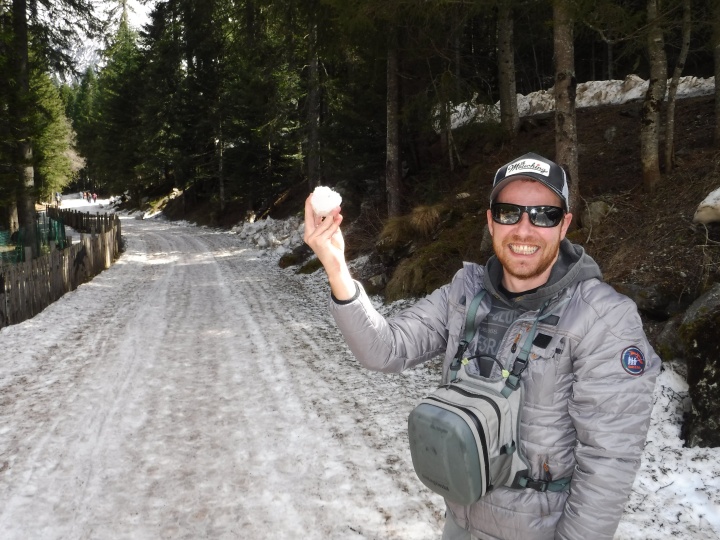