My first sight of my second attempt on the Aa at Wavrans, found a river flowing full, fast, and a little coloured, the weather in NE France having matched much of that of the SE of England in recent days. But it was cold, too, and there was no sight of any fly life, or fish.

I reasoned that the water might be a little clearer upstream and set of for Fauquembergues, some twelve kilometres away. It rained en route and I was not optimistic that I would be wadered any time soon.

I found the tabac of M Bernard Specque in the Rue Monsigny, which does not feature in SatNav, but it is basically the town square. He was puffing away in his bar and assured me that the river was fishing well, and for 15 euros it seemed worth a try, but it was still raining, although less heavily, but now the winds were up. “Park by the football stadium” he advised and helpfully gave me a photocopy of the appropriate local AAPPMAS webpage which contained a map of the beat ‘en reciprocite’.

My first view of the Aa here was of some considerable conservation work and below this looked the fishiest lies I have seen on this narrow tree lined (and therefore inaccessible in many places) chalkstream. 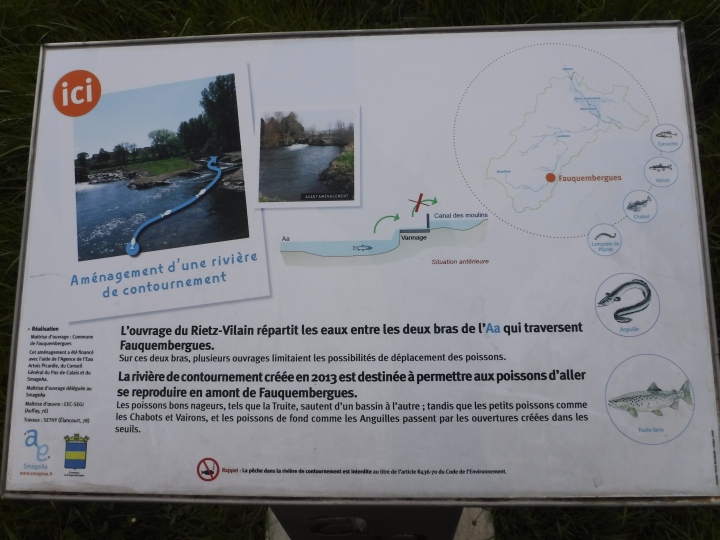 I became excited but still it rained and it was so cold! 9c my car advised, so I picnic lunched in the car.

Then it stopped…any fish were obviously ‘eyes down’, so I tied on an Alex Cortet tied orange bead, pheasant tail nymph, and to help me, squeezed a bright orange plasticised bite indicator four feet above it…

The wind was behind me which helped the casting no end, and I worked the pool diligently, impatiently waiting to reach the tail of it, where it shallowed and rushed away, but over more weed than I expected at this time of year, and where succour for wary farios existed.

At one point I am sure I felt a nudge, and two casts later, I had a fish on…for about three seconds. Bugger!

I cast the pool at different places, and one trout had a good go at the bite indicator, but ‘rien’ after an hour, so I trod off downstream.

Fishing was impossible between the tightly set bankside trees and over a narrow road (lane) bridge, only a couple of hundred metres away, I chucked a line at a quick riser. But…

I had to get back to ‘that’ pool…and did, and am pleased, 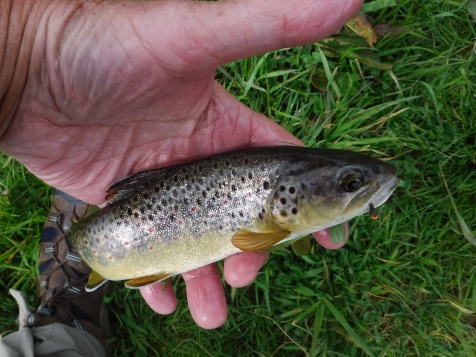 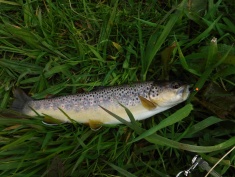 because this little ‘beaut’ liked Alex’s nymph, to give me my 11th department (of 96), 8th region (of 22), and 15th French river(of thousands!). He was lurking below overhanging alders and between weed forms. He needed to feed and will again, because after a quick photoshoot, he was back where he wanted to be.

Its off to Champagne-Ardennes in the morning, and the Haut-Marne!