I have fished the Verdon (with Guillaume Durand) once before, on a stretch below Castellane, so I looked forward to another day on this impressive river.

We (Christophe Pironnie and I) were to meet at the Auberge du Point Sublime, near Rougon. It is justifiably named, for a short walk upwards reveals the majesty of the Gorge du Verdon, which puts Boxhill into perspective, as well as the Derbyshire Dales, with the possible exception of Monsal Dale. Smaller than the Grand Canyon, but then what is not…but it is a ‘must see’ place, and the drive there is humbling, for the roads are carved under cavernous spaces of rock formed millions of years ago. Foster’s and Rogers’ creations are interesting in a current time sense, but insignificant, when compared with this place. It’s biblical in scale.

An obligatory cafe later, and after a very short drive, we were still massively above where we needed to be. My rod was assembled in eager anticipation, and the knowledgeable Christophe suggested I dis-assemble it for our ‘walk’, and it soon became obvious why!

Our tumble (poetic licence if you like) over strong rock, loose boulders and smaller stones (mini boulders to a ‘Townie’) and at a gradient of about one-in-six, between sharp edged and prickly vegetative ‘things’, underneath hanging and at times too dense foliaged other ‘things’ was, even for this 68 year old athlete, something of a challenge, and the desire to turn about surfaced more than once during this thirty minute endurance test, and I reminded myself that I was too old for this sort of thing more than once, and that I now understand the lure of the pristinely mowed banks of our Hampshire and Wiltshire chalk streams.

But dammit…68 is the new 38, and I, a true Brit, persevered, and when we arrived 600 feet or so below from whence we began, we found swimmers, picnickers, and canyon-ers, calmly strolling right through the middle of the stream, oblivious to the aquatic life we aspired to connect with. Great! But Christophe was patient though, and just knew where they (the intruders) might not be. So we walked a little further. It was 32 celsius, and I was exhausted after this mountaineering expedition, but I was re-invigorateded because a thoughtful person was armed with water bottles, and some restorative sugary, meringue-y nibbles to energise my flagging personum.

OK, so you think I am joking. Or maybe just a wimp? So take a look at this link to get a feel for what I ‘enjoyed’, https://www.youtube.com/watch?v=gr1MYEmHxXg

But when we started fishing, I thought….”put a fishing rod in this man’s hand” and all’s well with the World. And what was that last hour all about anyway? No pain, no gain, as our US friends claim.

Down below the towering peaks, and in the late afternoon sunshine, the water was green, azure, tumbling; 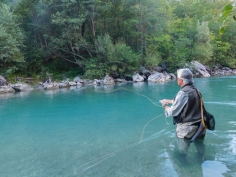 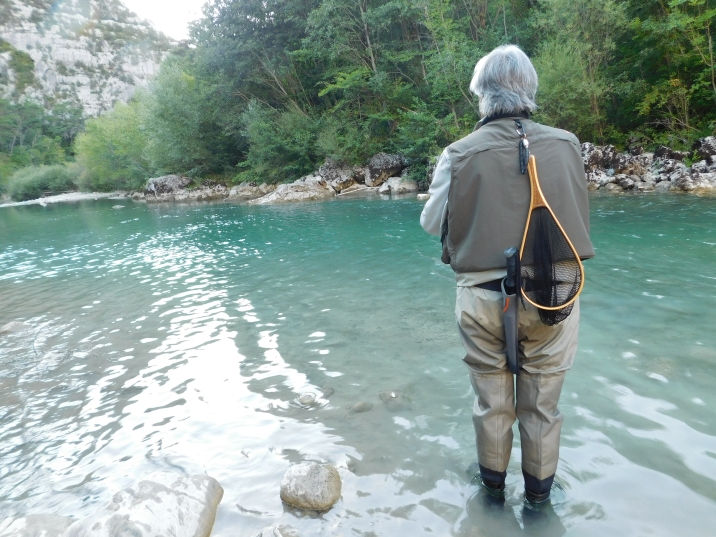 the wading over smooth stones, easy; there were long shallow glides, for in late August there is little rain to feed this river and the levels were very low; fish showed, the odd ripple-y rise, but to what we could not tell, for there were precious few flies in the air. An Adams, Christophe suggested. My ‘favourite’ I replied.

I did not mention that we had a photographer to capture my success. Christophe is nothing if not a confident guide !

A guide who fishes with his client, then catches before him, is a complete idiot! A guide whose wife fishes and catches her first trout before his client, is however, forgiven…and Agnes’ joy at her success was marvellous. Thank goodness she stopped, otherwise her pheromones would have distracted ‘my’ fish in her direction, and she would not have taken some of these lovely pictures. And, I could not have done anyway, without her meringue-y restorative!! 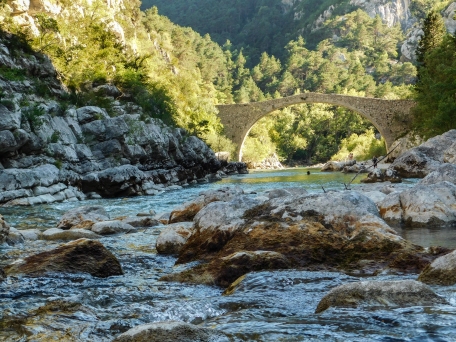 Oh! And I caught a few, too, for a lovely late afternoon and evening with Christophe and Agnes.