Wikiwand is very clear that the Jonte is a river of Lozere. Wikipedia agrees, but also includes it in their list of the ‘Rivers of Aveyron’! It actually forms the border between the two departments for a time (like so many rivers do, in France, they providing a ‘natural’ boundary) so, depending on where you are standing, it could be either! For my purposes, I waded the true right bank…just upstream of the ‘reserve stretch’ below the quaint village of La Rozier. Just as I did, a couple of years ago, when fishing with Pikko, but without success. then.

The Jonte is a delight. Intimate, tree lined, rocky bottomed, but not difficult wading – my type of stream.

In yet another cold afternoon this Spring, fly life was sparse, but the odd March Brown took flight, 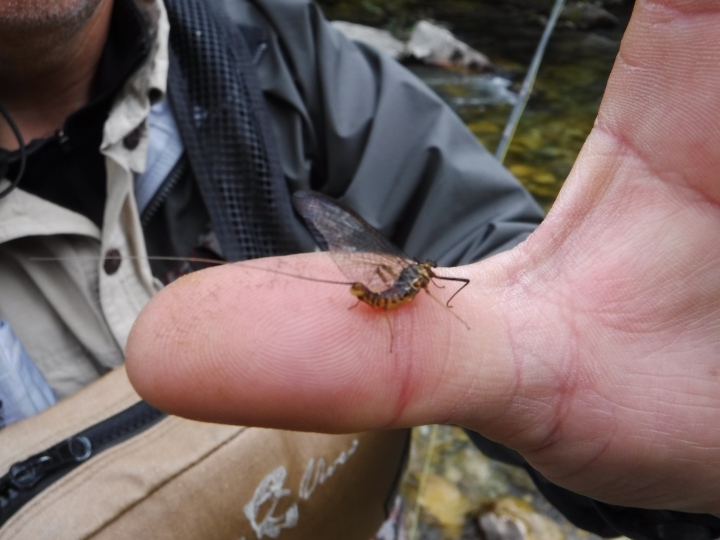 but precious little else, except for some olives. But it was windy and they did not stay around for long. The trees were largely leaf-less, the sense of security the fish felt must have been unsettling, and even though the sun shone for a little while, in the warmer air, there was insufficient on, or just below the surface film to interest the trout, whose eyes remain resolutely downward! Spring is late, this year.

I only saw one ‘gobage’, and from the Lozere shore, flicked a high post Iron Blue into the plume, and caught him! (If I know where you are, I am damned sure I can catch you!)

Several other trout came to my net, all on weighted nymphs, though, and usually from quicker water. 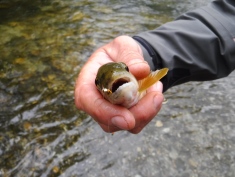 I will try others of the Lozere streams, and the upper reaches of the Tarn, and the Lot come highly recommended, but for now, I am happy to claim my 15th department !

(For anglers planning to fish in Lozere, Philip Pembroke’s ‘Smooth Guide to Fly Fishing in France’ describes the best this department can offer, very well…as it does the fishing in Brittany, Correze, Ariege and Calvados)