You don’t fish for a second time, with a Guide you don’t like, or rate.

I first fished with Eddy Bertrand in 2015 with Rob Pickering (Pikko), and although visits to three rivers did not deliver a single fario for either of us, we both enjoyed Eddy’s 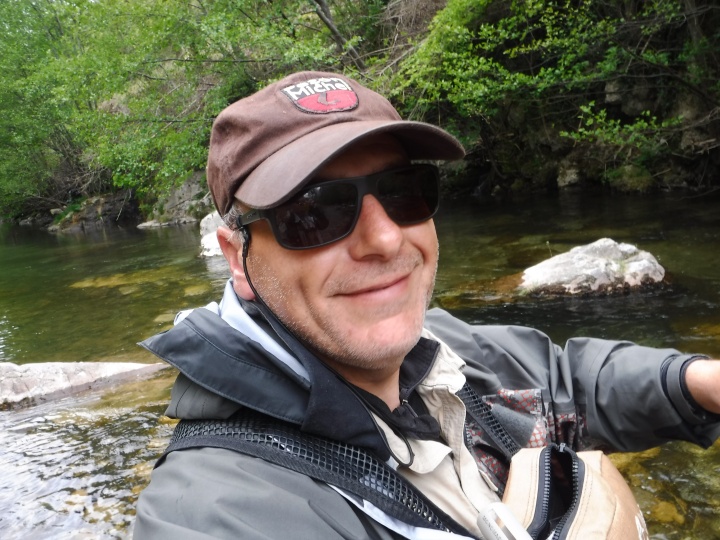 company, and so it was to him I turned to win what I could not the first time, on this year’s ‘Drive Down’ fishing tour.

Although Eddy hails from the North East of France, he visited and settled in Aveyron years ago, and lives with his wife, a Carer and Volunteer, in a village right on the banks of the Dourbie and close to Millau. An outdoorsman, he works the forests out of season, but during it, guides 150 days a year. He is an eager teacher and keen to see his pupils succeed. I was reminded of Eddy’s enthusiasm by his welcoming note – “See you soon, the trouts of the river Dourbie wait for you!”

The Dourbie may just be the river in France I enjoy the most, although the Sioule in Puy-de-Dome would run it close. Described, albeit by the Aveyron Tourist Board, as the “emblematic” river of the Aveyron, it is stunning. It starts its journey of 72 kms, high in the Mount Aigoual massif in Gard (where I fished with Eric Langlume, two years ago) and enters the Tarn at Millau. Its descent is not interrupted by dams, so there is no sudden release of water, and it flows through limestone, making it the clearest of streams.

In water with the high pH beneficial to fly life, it is no surprise when lifting a rock and grabbing a handful of riverbed soil, that what is revealed, is an extraordinary wealth of the sub aqua forms of Ephemeroptera and Trichoptera, as well as Gammarids galore. 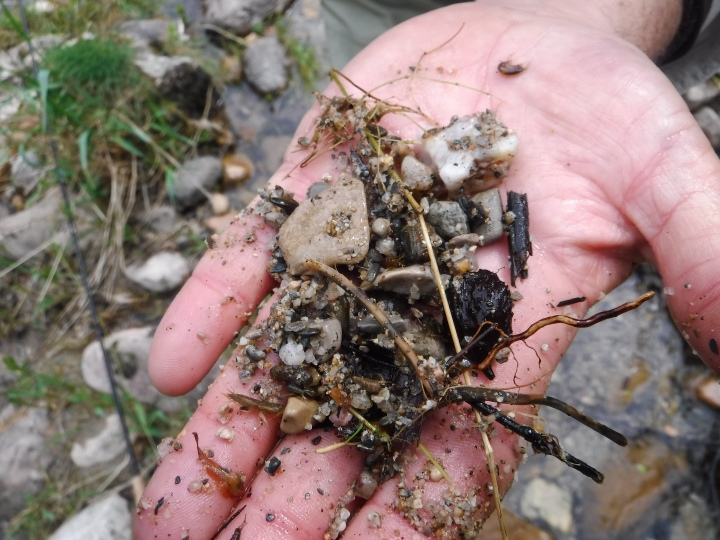 There were fishermen’s cars in every likely spot on a road where access points are limited, and it was 14 kms further upstream in the picturesque village of La Roque-Sainte-Marguerite, when we were able to begin our day. 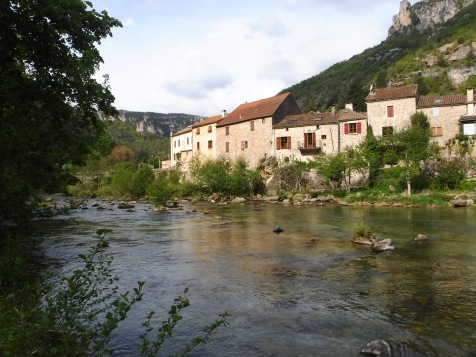 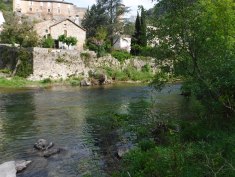 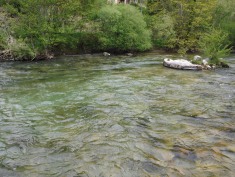 But Boy! Was it cold. And a strong wind was coming down the gorge. With no flies in sight, nor rises to excite, Eddy rigged up his 10ft rod for some French nymphing…an alien form of fishing to me. So we spent some minutes, him showing me ‘how’, and me trying, badly, to copy him. I mean, come on! Have you ever tried casting a long piece of nylon (twenty feet of it) with only a small weighted nymph on the end of it, upstream into a gale? Then tried spotting, through vari-focals to boot, the 2 foot piece of thin, coloured strike indicator line tied into its length, in fast rushing water, tightening into it, so as to stay in touch with the nymph….and to observe the slightest odd movement of it, and then lift into the fish which was nowhere close the nymph anyway. Incompetence breeds impatience breeds frustration…and I felt the lot that first morning! Helpfully, Eddy was patient and still encouraging.

My Master showed me how – 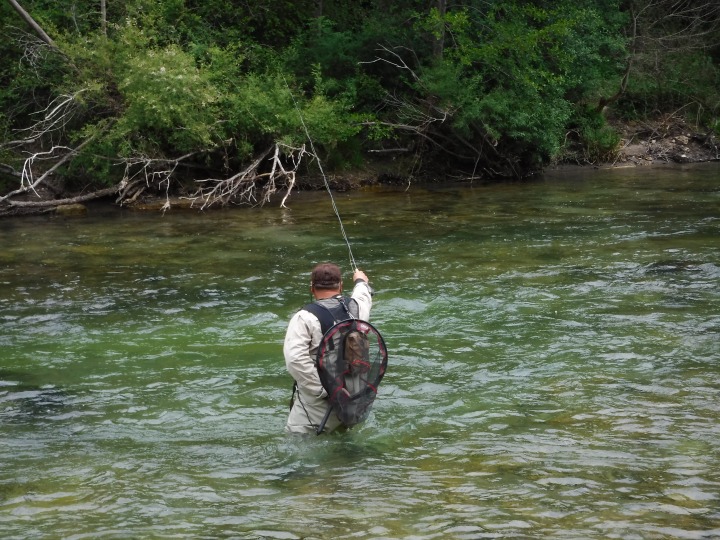 …and caught this little beauty which leapt and ran… 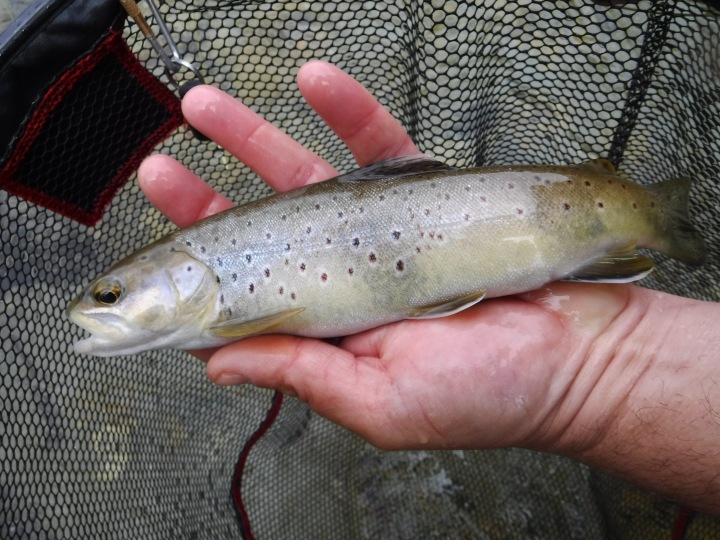 And whilst I improved, slowly, an early lunch was in order!

Never have I deserved a beer more. Nor the ‘plat de charcuterie’, vin rouge et de l’eau, and the ‘café alongee’. That afternoon, we skipped across to Lozere, for a happier time!

The following morning, I was determined to succeed, as was Eddy to help me capture/net this elusive department.

I had only the ‘matinee’ to fish and we started earlier than yesterday, on a morning where the sun shone brightly, and two early casts with the nymphing rig I was now happy to use, delivered distinct pulls and I was encouraged, because the brighter light seemed to awaken interest. But our stay was cut short by twelve kayaks, whose school kid occupants, and judging by their wayward drift, had probably never been afloat in those colourful plastic monstrosities, before. They careered all over the river, ending any prospect of catching a trout there. Thank goodness Pikko wasn’t here! He doesn’t like kayakers.

So car bound (or rather, in Eddy’s fulsome white van) we went upstream, after establishing where the splashers had entered the river, and we found this idyllic spot. 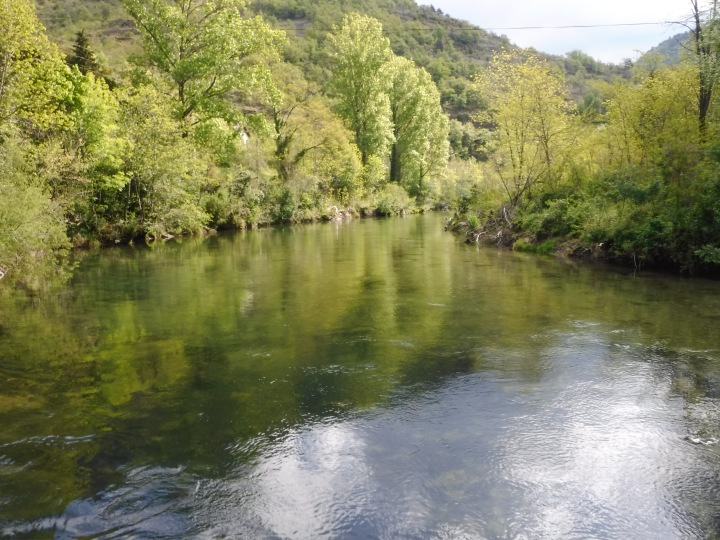 I caught three Aveyronese trout quite quickly, and lost the best of my whole trip. We both saw the blighter, which Eddy reckoned was ‘at least 40 cms’ and felt like it. It’s always tough to lose a good fish. 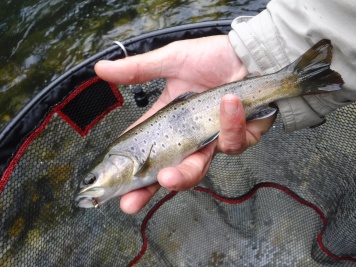 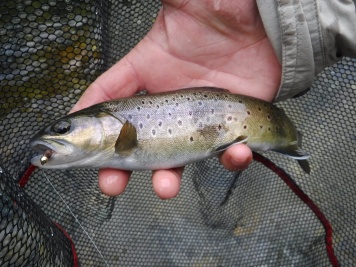 Using nymphs with a little red or orange influence in the dressing is a French ‘thing’ and Eddy encouraged me to try it at home. Shrimp have carotene in their shell, so presumably it is linked to that?
Also, Eddy pointed out an interesting characteristic of the Mediterranean strain of brown trout. The juveniles have black spots above, and red spots below, the lateral line. These latter fade after a couple of years and turn black…and there is often a dash of blue colouration over the gill cover. I have not heard of that before.

What a great time I had with him. 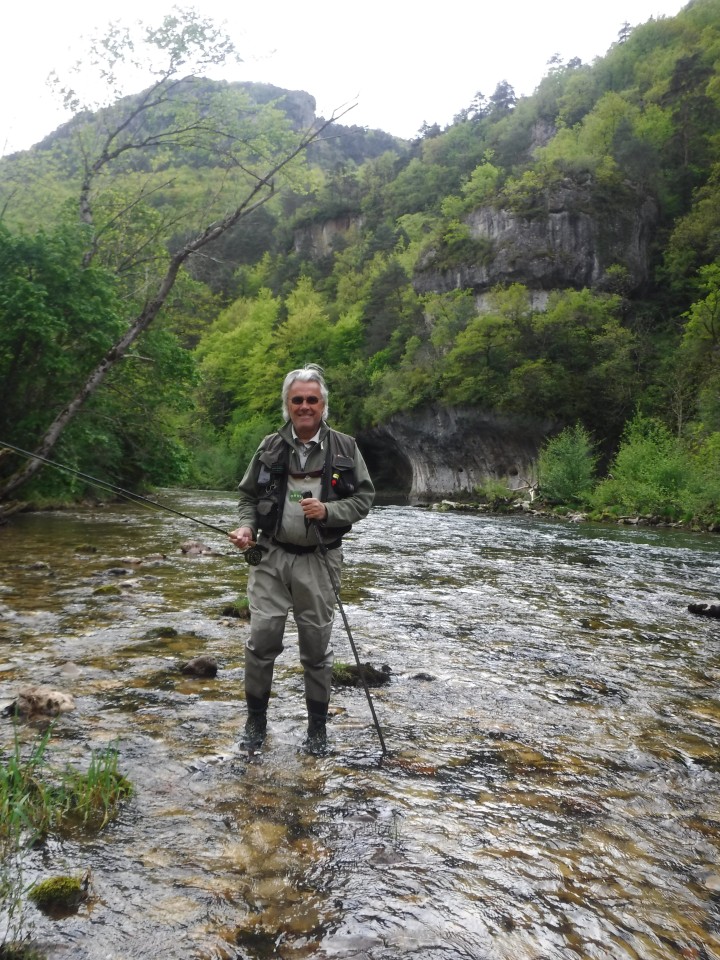 I recommend him to any angler visiting Millau. He knows all the waters around here, and I may return, for the Tarn has to be on my rivers ‘bucket list’, and when I do, it will be with Eddy.

The Dourbie is a cracking stream.

Thanks, Eddy, for two great days, and more, for teaching me to fish the French Nymph.